Gemini's Path is essentially a dual VCA with internal modulation source and trigger extractor. The clever internal interconnection of the components makes Gemini's Path a panorama and dynamics tool. The module reacts to the transients of incoming CV or audio signals, extracts trigger signals and activates the internal modulation source. A compressor or autopanner, for example, can be patched in no time at all and can be quickly recalled using the memory function.

The Gemini's Path is a 6HP panning and dynamics processor consisting of several internally interconnected sections:

-Trigger Extractor consisting of rectifier, envelope follower and trigger detector. The sum of the incoming audio signals is fed into this section and the threshold potentiometer determines from which incoming voltage value a trigger is extracted.

-The modulation source is triggered by the above section and generates envelopes, LFOs or random values.

-LFO Pan: The LFO controls the panning of the audio signal and can be modulated in frequency (Time) and stereo spread (Depth). Triggers in this mode serve as soft sync for the LFO.

-Random Pan: Similar to the LFO Pan, the frequency is modulated by the Time parameter and the width of the panorama by the Depth parameter. Unlike the LFO Pan mode, this mode generates random values that move from one value to another. Trigger signals generate new random values.

-Hold Expander: Similar to the Expander mode with the difference that the VCAs are controlled by a hold function instead of a release envelope.

-Animated Pump: Like Pump mode but with a positive Saw-LFO

-Granuliser: In this mode gates of random length are created which are influenced by the time parameter. The width of the panorama is controlled by the Depth parameter.

Since the module is DC-coupled, it is just as suitable for processing control signals as for audio signals. 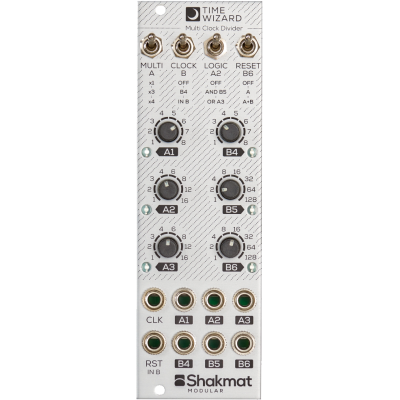