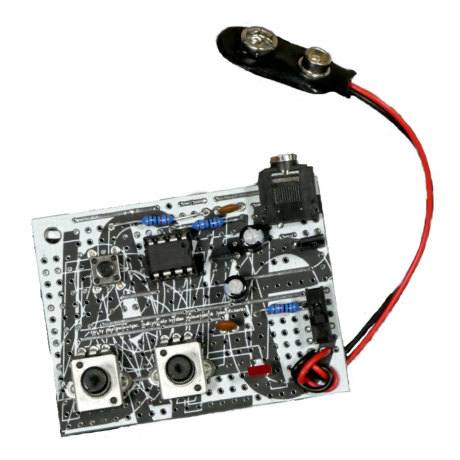 This is a full kit of the PCBSNR not the assembled version!

Simple patchable noise device based on the Radical Chip.

The PCBSNR (printed circuit board simple n radical) is a simple and low power portable noise device based on the Radical Chip, which is a collaboration between Max Wainwright (me) and John Richards (Dirty Electronics).

Max Wainwright: "The design is based on the original stripboard version, and is thus very easy to modify and hack. All traces are visible, and cuts and front-side traces are labelled on the back of the circuit board. This choice is inspired by dernulleffekt's pop-neuron, which is itself a straight pcb-ification of a protoboard circuit, with traces visible: take a look here.

The PCBSNR has some basic patchability, with pins for output, the two inputs, and ground (for patching in pull down sensors or other stuff). There is no protection on the inputs other than the built-in diodes in the PIC12F1840. So take care, try and keep it between 0-5V etc.

I use pins rather than female headers, because I believe the pins will last longer. When the socket wears out, you need to replace it.

Now, if a patch cable wears out, just cut off half and solder it onto a jack or something and throw out the broken half away (don't throw the entire cable away if only one jack is broken). It also makes it a tiny bit more difficult to patch with e.g. photosensors or thermistors, but they don't really fit well into the female headers anyway. If you want to patch with e.g. a Bastl Kastl, just use male to female adapter cables."

1 other product in the same category: