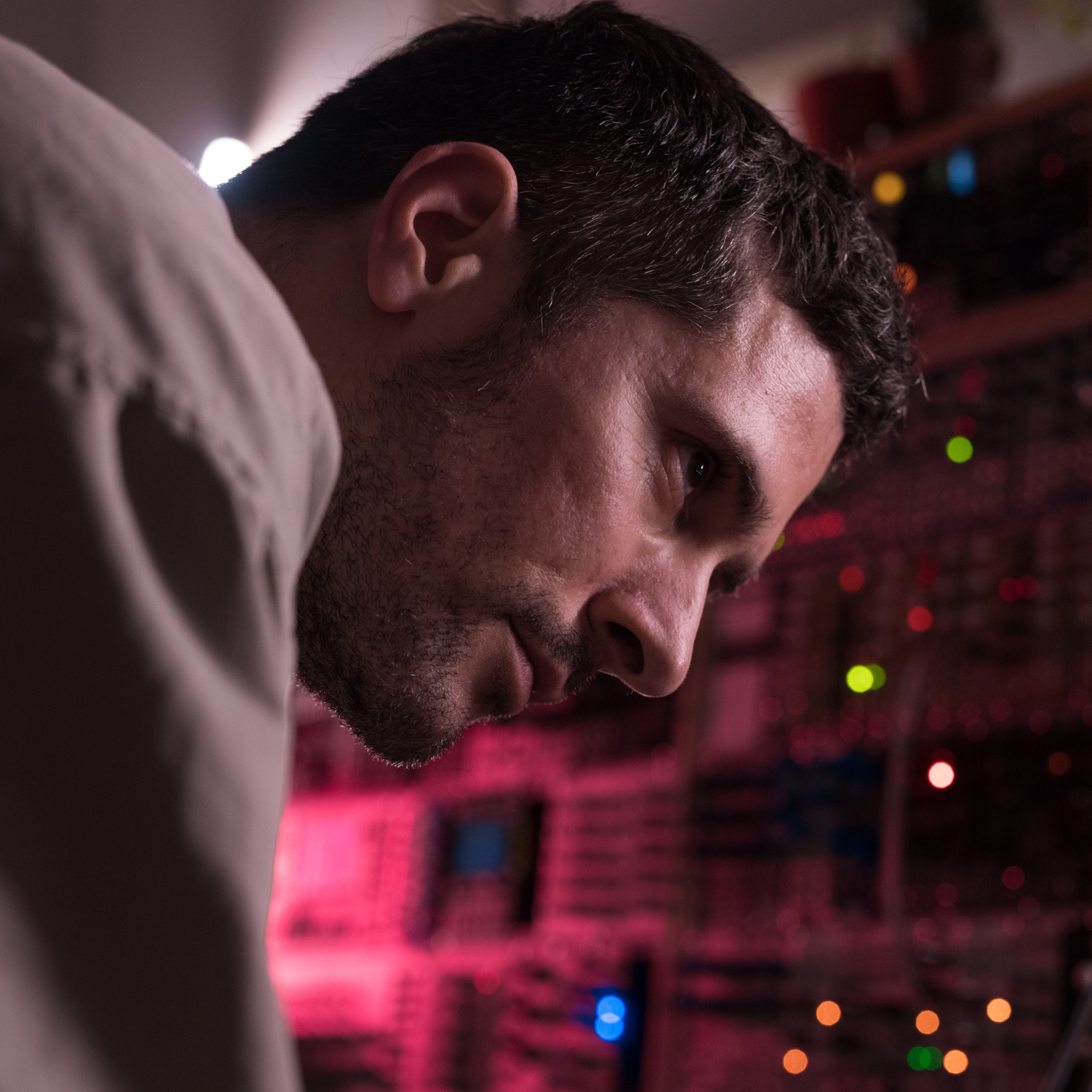 Certainly within Prague, Exhausted Modern requires little introduction. From his own work as a musician, to managing his Endless Illusion label’s output, everything that Exhausted Modern does exudes sonic personality and vision.

Suitably dystopian for a dark January evening, Exhausted Modern’s performance for Noise.Kitchen is a snapshot of his talent and direction as a musician: brooding and dark from the onset, the piece morphs and shapes into a stern percussive drama, characteristically pessimist, but staying shy of hopeless.

Throughout, Exhausted Modern wields percussion more as a weapon than an instrument, the kicks, claps, and snares rolling together into a blunt tool for beating the war drum. As the crescendo is approached, a stunted and abbreviated vocal shunts itself into prominence, gradually receding to lurk behind the ever-thundering percussion. 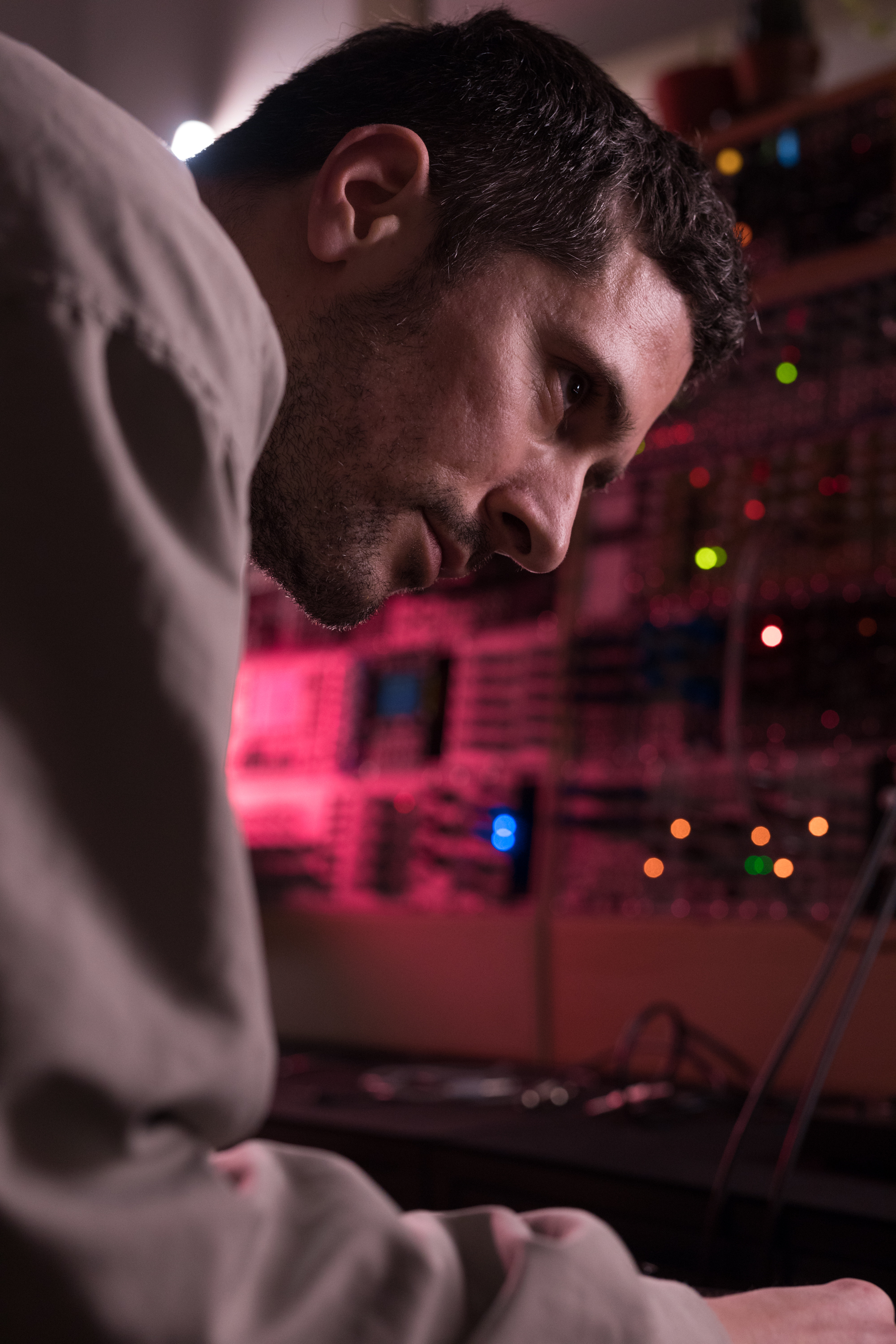 Thank you for the set - really amazing music. Can you talk us through how you prepared it?

I was jamming a month ago, and initially made an ambient track. I thought I’d record this track, perhaps for an ambient album, and then it turned into this! It often turns out this way, when I make music. I have one idea, and in the end it turns out as something very different. I was listening too much, perhaps, to new records from Ploy and became inspired to make something like this. I started adding in the break sample, and from there it was easy and all seemed to fall into place.

I could hear the ambient roots in the beginning particularly…

Yeah, it was in the beginning of the piece definitely. Then, I was adding the layers of different sounds, adding the bass. I thought it felt kind of Trap-ish, and I felt I could keep this vein of music going. The initial idea was very different, but I’m happy with this now. I might end up recording it as a track.

Yeah, I think you should! So, obviously we’ll have to ask about some of the modular machines you’ve brought for the performance. Are there any specific modules which you used that helped bring this piece to life?

Definitely the Ikarie filter, the new filter from Bastl. I just got it and it really changed the layer, adding some sparkling sounds that evolve. That really was a game-changer for me. My main powerful modules are the Ornament and Crime, and the Monsoon module which is a clone of Mutable Instruments’ Clouds module. I try to keep my modular simple, and these are the most powerful in my setup. I feel like I have to mention I use lots of Bastl stuff in there too!

We did notice! Obviously you’re not just using modular for this performance, and we were just talking about the Octatrack, but would you mind just talking us through some of the other machines you’ve brought today?

Yeah, the Octatrack is the whole drum section, I use it for these glitchy drum sounds, and for the bass. I’m also sending all midi out from the Octatrack. The main melody part in the piece is from the Roland D05, an imitation of an older synthesiser. I like the combination of having the modular for experimental stuff, but I’m a big sucker for melody, and I use the D05 for this. But the main brain, definitely, is the Octatrack.

I was also going to ask you, on a bit of a different topic, a bit more about yourself, for example why you chose the name Endless Illusion?

Endless Illusion is kind of simple. I came from the graffiti scene and Endless Illusion was a really old graffiti video, I think German. At the beginning the label was a blog, and when I was figuring out the name I thought it sounded good. Eventually it became the name for the label also. As for my name, Exhausted Modern, in the beginning there was a really big meaning. There was a book, in Czech, called ‘Vetřelci a Volavky’ which means ‘Aliens and Herons’. It’s about the old sculptures made during communism. There’s a part from Ďáblice, the neighbourhood where I grew up in the suburbs of Prague, and I remember, as a kid, these pretty futuristic, cosmic sculptures were everywhere. We were always playing in and around them, but I never gave them much attention. Later, I discovered that they probably influenced me, being around these sculptures. In the book, this part of the book was called Exhausted Modern, describing the period of time. I liked the idea, and thought I could use it. I do feel some sort of exhaustion from society, this overly tech world, and this term describes my feelings around the world. I have stuck with it, and it still resonates with me.

Both names, especially together, have a really strong tie between them.

Yeah, the only problem is the names are quite long for posters and things! I was even thinking about some abbreviation like E-Modern, or something…

Yeah, keep it as it is! I was also going to ask you a bit more about the label, now you’ve described what’s behind the name. Does that concept have any impact on the artists you pick for the label, for example?

There is definitely some evolution in my approach for picking artists from the label. In the beginning it was very spontaneous, we were pretty hyped. Everyone from abroad who we were speaking to about the project were really excited too, and we released music from these foreign artists a fair bit. I wouldn’t probably do this so much these days, but it still fits with where we were back then, and I don’t regret it. However, these days I have changed my approach, to styick with more local stuff, supporting local artists and release music from people I know personally. I’m not really asking people I don’t know for demos or something. I don’t even listen to demos so much. I can’t make many records, it’s super expensive. I can press three, four, maybe five records a year, and I can easily find the music or those within my circle. Next month I am releasing remixes for my album that came out last year, ‘Year of the Rat’. Everyone who I asked for a remix was involved with the album, or interested in it from the beginning, or we were talking about it or something. I think this is a natural way, and I like to avoid bringing big names in.

I think it’s really nice to celebrate the music made in your friendship group, especially if you have enough friends making strong music.

The people who I ask really appreciate me asking them, you know they were interested in the original release or my music in general. I’m not going to ask someone who didn’t know about the release to do a remix.

I see more labels doing this now, where they focus on their local scene and build it up.

Exactly. I think this last year has really amplified this mindset, where people are much more likely to stick with the area around them. You need to support what’s around you, it doesn’t make sense to be too global, asking strangers for music when there’s no connection.

Yeah I agree with that. Moving on, what releases in 2020 gave you hope, joy, or peace?

Probably some stuff that I charted here. Something that definitely took me out of lethargy was Philipp Otterbach's debut album on R.I.O. It doesn’t happen so often that someone's sound freezes me for a while, making me think how it was made, and that happened with this record. He is a true legend to me, pushing techniques to the edge. Same with Ploy’s percussive madness on LIES, for example. Pessimist’s alias Soft Boi and his ‘So Nice’ album made my travels to work much more enjoyable, a sweet, old-school UK sound throughout the record. Actually, loads of good stuff was released last year. People had enough time to focus on music, perhaps that's a bright side of this lockdown.

What trends did you observe in music over the last year? How do you think things will change in 2021?

I think the shift is into digital and sample based music. I feel like the market got fed up with analogue, retro-sounding synth music. There is loads of really fresh supra-genre stuff coming these days, using internet sounds, sampling youtube videos, mixing all perceptions of the modern age around us. Represented, for instance, by BFDM records, Big Science, TTT and others like them. That's what I have been into lately.

What releases are you looking forward to in this year, from Endless Illusion but also those of your friends?

Beginning of the new year seems really promising. Maoupa Mazzocchetti just dropped a single for his third LP and that caught my attention instantly, he is the one that keeps surprising. Carcass Identity is supposed to have a debut LP on Phase Group, which I am gonna put in my basket upfront, without listening. June's new upcoming record on Artificial Dance has been on my rotation for a while. From the local scene, there is a really nice compilation of re-works of Slovakian traditional folklore music, coming courtesy of Punctum Tapes, which I have been kind of involved with, and Oliver Torr's forthcoming new album.

What space in Prague are you missing most during COVID?

Ankali and Planeta Za, for sure. That place became a stable meeting point, and arguably the best parties in town. Luft coffee also, super laid back vibes every time, I love to go to the listening sessions there.

We saw you recently brought the Endless Illusion mix series back to life with a wicked one from Kristiina Männikkö - what do you have in store for the series?

The series was kind of in hibernation for a while. I couldn't find a motivation to push it, mostly because of oversaturation of guest mixes on the internet — there are tons of mix series out there without any effort, made primarily for boosting views and followers. So, since we got more frequently in touch with my friend Jonas, I got this idea of doing it more properly, giving artists space and showing them in a wider perspective. So, we put up a new website, and Jonas is making the interviews in a kind of chit-chat style, and we add pictures and links. That brought some new motivation. It's one mix per month, and we just dropped the latest one with Ece Özel. We already have lined up Agnes Aves and Benedikt Frey for the next two months, which is really exciting. I honestly have hundreds of names in mind, but would like to stick with people around Prague, or more unknown artists.